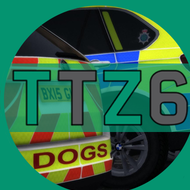 Hello, today I am releasing my marked XC90 in the Staffordshire Police Setup. This vehicle is currently used as an ARV within the force and used to be a part of Staffordshire Roleplay's Fleet.

DO NOT REUPLOAD OR RIP AT ALL!

There are no comments to display.

Think before you post. Toxic behavior will not be tolerated. Unconstructive, toxic or unnecessarily sarcastic comments will be removed and warnings issued.